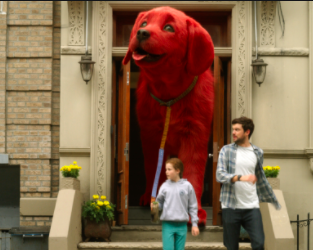 The big red dog tried to chomp the immortal gods. But in the end, the Eternals prevailed over Clifford the Big Red Dog.

With its $150.48 million domestic total so far, Daniel’s cinematic adieu as 007 is now the sixth biggest-earning Bond film in the U.S. and Canada and will likely surpass a few other titles in the franchise.

Actor Andy Serkis’ third directing feature, Venom: Let There Be Carnage, is proving to be a monster hit. After collecting $4 million at the cineplexes and placing fifth, Venom 2 officially became the second movie to earn past $200 million in the COVID-19 health crisis era, following Shang-Chi and the Legend of the Ten Rings.

Making up the rest of the top ten were, in order, Kristen Stewart’s Spencer ($1.53 million) and Keri Russell’s Antlers ($1.2 million).

Overseas, Eternals also won this round with $48 million. But the big offshore news was No Time to Die has eclipsed Vin Diesel’s F9 as the highest grossing Hollywood release internationally this year and in the pandemic era. The 25th Bond installment nabbed $23.94 million to increase the offshore total to $558 million and push the global cumulative to reach the $700 million mark.

Tom Hardy’s return as Venom also notched a milestone as it crossed the $400 million global mark ($441.5 million, to be exact).

In China, Dune, one of the few titles to get a release date in the world’s biggest film market, earned $38 million so far. In that market, No Time to Die’s overall tally is $57.9 million.

Only Jungle Cruise is reporting disappointing figures in the Chinese box office – $3.24 million on its opening last weekend. Box office analysts attributed the paltry numbers to piracy and the fact that the Dwayne Johnson-Emily Blunt action-adventure-comedy bowed elsewhere in July.

The top ten SVOD programs, in order, for the week of October 11 to 21, were: Squid Game, You, Maid, Shameless, CoComelon, The Blacklist, Seinfeld, NCIS, The Great British Baking Show and Criminal Minds.