The Jeremy Williams Story “TENACIOUS” Has Gone To Script, Will be filmed in Columbus 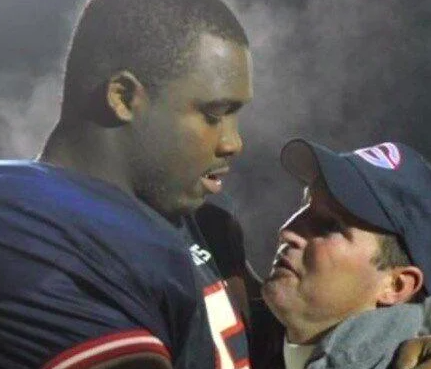 TENACIOUS tells the inspiring true story of the Williams family. Jeremy Williams, a small town Georgia high school football coach, is diagnosed with ALS in his prime as he and his wife Jennifer are raising two young children, one with spina bifida. While battling this terminal illness, Coach Jeremy Williams – barely able to breath, slurring his words and leaning on his players as his fellow coaches echo his play calling – led Greenville High School to a thrilling undefeated regular season in 2009. For his efforts Coach Williams was selected The National High School Coach of The Year by the NHSCA, and he was voted the Atlanta Journal Constitution Sports Story of The Year. Coach Williams passed away on Sunday, March 13th, but his memory, and legacy, continues to inspire all that knew him, including the producers of the movie.

Executive Producer Steven Camp says that Jeremy’s recent passing further energizes the process of making this movie. “We are more committed than ever to making this film. We’re going to honor Jeremy and we’ll be working closely with Jennifer and the kids in the process,” Camp also says, “This film will serve to offer many great redeeming qualities. It will serve world awareness for ALS. It will serve to show how a family united a community with faith, love, courage and humor. And most importantly, this story will serve to show how through all of the adversity they were facing, Coach Jeremy Williams and his family never, ever gave up on their faith in God.”

Sheila Hawkins, who is also a producer, agrees. “I’m a believer and I have rarely witnessed faith more powerful than working with the Williams family. This is a great story that will make audiences cheer but it’s also an important message to share with the world.”

Filming is tentatively scheduled for Spring 2023 in Georgia – the home of Jeremy’s family and high school. The producers feel this will give the film authenticity while generating an economic benefit for the local community.

“We want to tell this story right and support the Williams family and their community in the most positive ways,” says producer Richard A. Cohen. “Shooting in Columbus, Georgia will allow us to accomplish all of that and more.”

Julia Fowler, who grew up in Gaffney, South Carolina was a cheerleader at her football powerhouse high school and understands what a high school football team can mean to a small southern town and how faith can bind a community together.

“This story is far greater than fiction,” says Fowler. “I am moved to tears often while contemplating my approach to this screenplay because Jeremy and Jennifer are so inspirational. My aunt Sarah had ALS, so that also hits close to home. I am honored that I have been blessed with the opportunity to bring this story to life on the page.”

Andy Robinson, a friend and advisor to the Williams family who is also an executive producer of the film, sees the film as a part of God’s plan for Jeremy. “Jeremy has inspired everyone he has come in contact with and this film serves to glorify God’s kingdom on a global scale. Many believe this to be the most courageous sports story of all time.”